Asturias is relatively unknown among bird watchers. However, what makes Asturias particularly interesting is the large variety of bird species. This is due to the presence of different habitats (high mountains, agricultural areas, rivers, estuaries, coast) at a relatively short distance from each other. Few people know that the coast around Gijόn is one of the best places in Spain to spot migratory birds. Today I visit a good spot to do some birding along the coast of Gijόn.

Some migratory birds that can be observed here are:

I start at the beautiful “La Providencia” chapel. The origin of this chapel is unknown. However, the local myth tells that it was no more than a hole in a cliff in the nearby cape “San Lorenzo”. The cave was inhabited by a hermit who did not know how to pray. Sailors built a new church for him on the “Isla de Tortuga”, which disappeared after his death. The current chapel stands on the origins of a chapel from the 19th century, but it was rebuilt and restored several times.

A good viewpoint for birding along the coast of Gijon

From the chapel I walk up and down a winding road towards the Cabo de San Lorenzo. Because this high cape runs into the sea, large numbers of migrating birds can be observed from mid-August to December, especially in the early morning. There are two comfortable viewing points with benches. From here, you see the “Isla de la Tortuga”, an island that is indeed shaped like a turtle (a long-necked one though ?).

Today is a sun-drenched day. Moreover, I am here around noon, meaning I don’t see much more than a few seagulls and egrets flying over and foraging. Nevertheless, the winding path along the cliffs is worth the effort.

After 1 km I arrive at the beach “Playa de Peñarrubia”, characterized by a combination of sand and rocks. Here you can observe different species of gulls and waders. This is also a good place to search for fossils!

I walk back through the “Parque de la Providencia”. In the fields, bushes and trees you find different kinds of songbirds, both year-round and migratory ones. During migration and in the winter you have the chance to encounter rare species from northern Europe such as Ice Bunting (Calcarius lapponicus) and Snow Bunting (Plectrophenax nivalis).

I finish the route by climbing the viewpoint in the park, build in the shape of a ship bow. From there, you have a beautiful view towards Gijόn in the west and Villaviciosa in the east. Enough options for a next trip!

Are you interested to do some birding along the coast of Gijόn or at other spots along the Asturian coast? Or do you prefer to spot alpine birds and raptors in the high mountains? Or perhaps a combination of these? Check our birding activities at intoasturias.com or contact us at info@intoasturias.com. 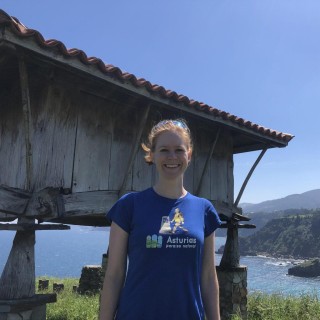